Art imitates life at Newfields' 2020 Winter Nights Film Series. For its 10th season, the series takes a satirical look at Western society over the past three decades and explores themes such as sensationalized violence, racial representation, and intersectional feminism. Each film, which gleefully tests the boundary between fiction and reality, is preceded by a brief lecture and followed by open discussion. 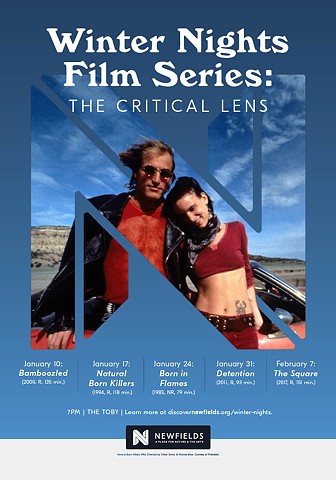 January 10 Bamboozled (2000, dir. Spike Lee, 135 min., R) Featuring an all-star cast, including Damon Wayans, Jada Pinkett Smith, and Mos Def, Bamboozled focused on a TV writer named Pierre (Wayans) who develops a modern minstrel show in an effort to get fired from his job. Instead, he becomes a massive success.

Originally from Detroit, MI, Dr. Kelli Morgan earned her doctorate in Afro-American Studies and a Graduate Certificate in Public History – Museum Studies from the University of Massachusetts Amherst (UMass). A critical race cultural historian, Morgan specializes in American art and visual culture. Her interdisciplinary research and curatorial work examines and theorizes the ways in which American artists, art objects, art history, and art institutions both challenge and reify the systemic mechanisms of anti-Blackness in the United States.

Crystal Hill is an Indianapolis native who graduated from Indiana University in 2014. Since then, she's worked at the Associated Press in Boston and Philadelphia; and McClatchy in Washington, D.C.

Dr. Jackson is an Associate Professor of Teacher Education in the Indiana University School of Education at Indianapolis. She earned a B.S. in Elementary Education from Miami University (Ohio), a M.Ed. in Curriculum and Instruction from Indiana Wesleyan University, and a Ph.D. in Curriculum, Teaching, and Education Policy from Michigan State University. Dr. Jackson considers herself to be a scholar-activist committed to social justice issues pertaining to the historical and contemporary oppression, miseducation, and liberation of children of Color in U.S. schools. She studies these issues within the field of teacher education where her research and teaching focus on teacher learning and development across the professional continuum specifically centered on preparing teachers to teach for social justice, developing culturally responsive teaching and pedagogy, and examining the experiences of preservice teachers of Color and Black women faculty.

January 31 Detention (2011, dir. Joseph Kahn, 93 min., R) A group of co-eds at Grizzly Lake High must escape serial killer Cinderhella and restore order to the space-time continuum, all while navigating the highs and lows of embodying teen movie archetypes.

Craig Mince is the President of the Athenaeum Foundation in Indianapolis. Having served as Theater Director of the IMAX at the Indiana State Museum since 2009 as well as Artistic Director and Board Director for Indy Film Fest since 2017 and 2010 respectively, Mince's roots in the local film community run deep. Mince graduated from Ball State University in 1999 with a BS in Marketing.

February 7 The Square (2017, dir. Ruben Östlund, 151 min., R) Christian, a Swedish curator of modern and contemporary art, falls prey to his own vanity as his career and personal life unravel before him.

Danicia Monét is an arts & culture ambassador and urban planner pursuing her PhD on the User-Experience of Race. Her applied research is based on the context of Race & Space – Growing Critical Cultural Capacity in the Built Environment. As a fellow with Americans for the Arts for the Arts and Transportation for America she challenges the ideas of public space and place-making to encourage a people-centric status quo. Danicia holds a Bachelor in Urban Planning and Spanish & a Masters in Nonprofit Management with a focus on global relations and sustainability. She is a creative director, interaction designer and planner with ongoing projects in Monteverde, CR, Dallas, TX and New Orleans, LA.