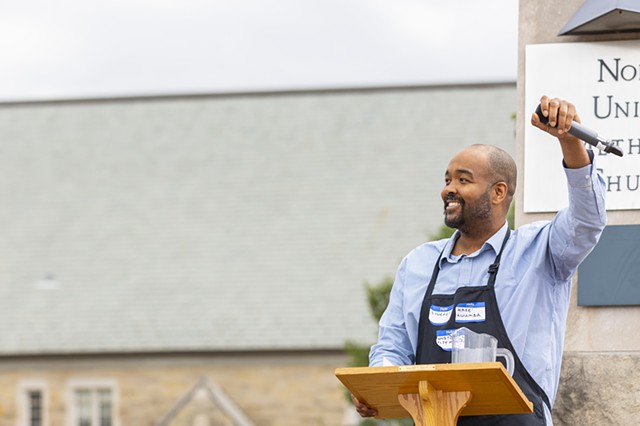 Food pantries here and there, but only giving us the least. So, I must get it how I get it. I have these kids' mouths to feed. People walk right by with change, but they afraid to even speak. Plus, they don't want to understand the struggle, they'll just judge me how "they see."

The rich don't come around cause they're too afraid to walk these streetz. They call this a "bad area," but want to take it away from me. All they think about is self. Yes, they're all about the greed. They toy around with your emotions when they know that you're in need.

They plan to make a desert, just so they can have a beach. Perfect timing for the red line system to expand it's reach. Raising taxes on homes owners; even pillars had to leave. Generations are ashamed because they saw their elders grieve.

5-0 murders us. Then honor them for bravery. That's why we handle our own problems instead of calling the police. Mental health is bad here in this land of slavery. They're making food sky high to deprive black communities.

Pesticides sprayed on produce. Oxygen taken out our drinks. Farmers pumping hormones and selling us fake meat. Fast food and dollar stores set us up for defeat. Gas stations, drugs and alcohol preying on the weak.

Who really cares about the people and ain't lying straight through their teeth? If we don't think about the least of these, we're not worthy of a seat. Let's feed one another from north, west, south and east. Let's go beyond the structure that sets us up to suffer, drown and sink.